In celebration of our 25th anniversary, we’re bringing you strictly limited merch bundles for every studio album we've ever released. Head over to http://bit.ly/AE25Years to get your copy of the "Black Earth" bundle! 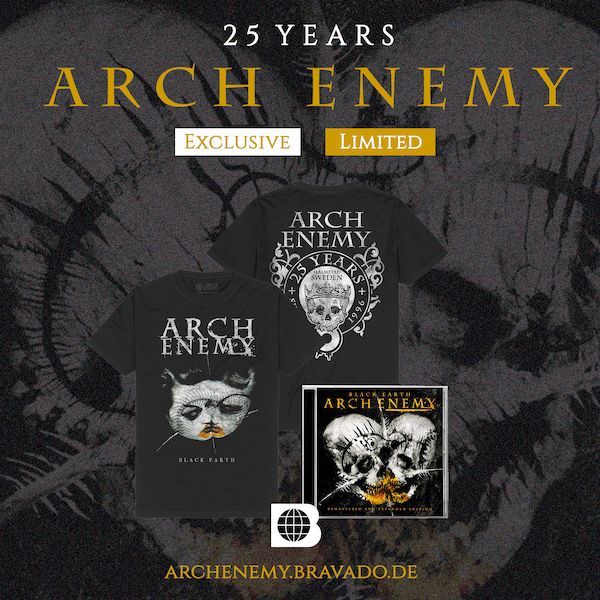 "Arch Enemy 25th anniversary random fun facts & memories with Michael Amott, part 1/10: The first song I wrote for the band was “Bury Me An Angel” and I knew I needed a killer drummer for this project but didn’t have anyone specific in mind. Luckily I was introduced to Daniel Erlandsson through a mutual business partner in 1995. We rehearsed only three times, just the two of us, as a guitar/drum duo. As soon as we started playing together I had a strong feeling this was going to be something quite special, Daniel was a 19 year old drum phenomenon - everything we played sounded absolutely killer!

I reconnected with Johan Liiva from my old days with CARNAGE for the vocal position and drafted my younger brother Chris to share the lead guitar duties with me. When entering Studio Fredman in early 1996, we worked super fast and I had everything mapped out in my head. Producer/mixer Fredrik Nordström was a fantastic engineer and a real character on top of that, we ended up doing a lot of recordings together after this. I also played the bass guitar on the album, with the intention to have Johan (Liiva, vocals) pull double duties if live shows would come up. That’s why Johan is sneakily credited as playing bass on the record.

Things worked out differently and we ended up recruiting a bass player later so that Johan could focus on his vocals live. The recording and mix was done during 9 very intense days on analog 2” tape. Not a computer in sight. I’ve seen people listing an Arch Enemy demo tape in our discography, but in truth there never was a demo and our first recorded effort was “Black Earth”, our debut album. There was very little money around and I’d sleep on friends couches or on the studio floor.

We did a photo session during the mix days in the studio and this was actually the first time that the whole band was gathered, meaning that it was the first time that everyone met each other. “Hello, I’m so and so and I’m playing on this record too”. The album was picked up by a Japanese record label, which turned out to be very important for the bands career. In the rest of the world, “Black Earth” came out on a very small indie label, meaning no promotion budget and no push in the industry. We did receive some great feedback from the Metal underground, but we had yet to make a big impact. The Metal music scene in the mid 90s was different and the style we were doing, blending Death/Thrash with Hardrock/Heavy Metal harmonies and solos wasn’t the “in thing” at that time.

Getting invited to tour in Japan in 1997 as a support act for U.K. Doom Metal band CATHEDRAL changed everything for us. We discovered we had a fanbase that loved the hybrid of styles we were doing. This was the spark that was needed in order for us to carry on and make the second album..."