In celebration of our 25th anniversary, we’re bringing you strictly limited merch bundles for every studio album we've ever released. Happy 10th anniversary to “Khaos Legions” (2011)! Get your bundle now: http://bit.ly/AE25Years! 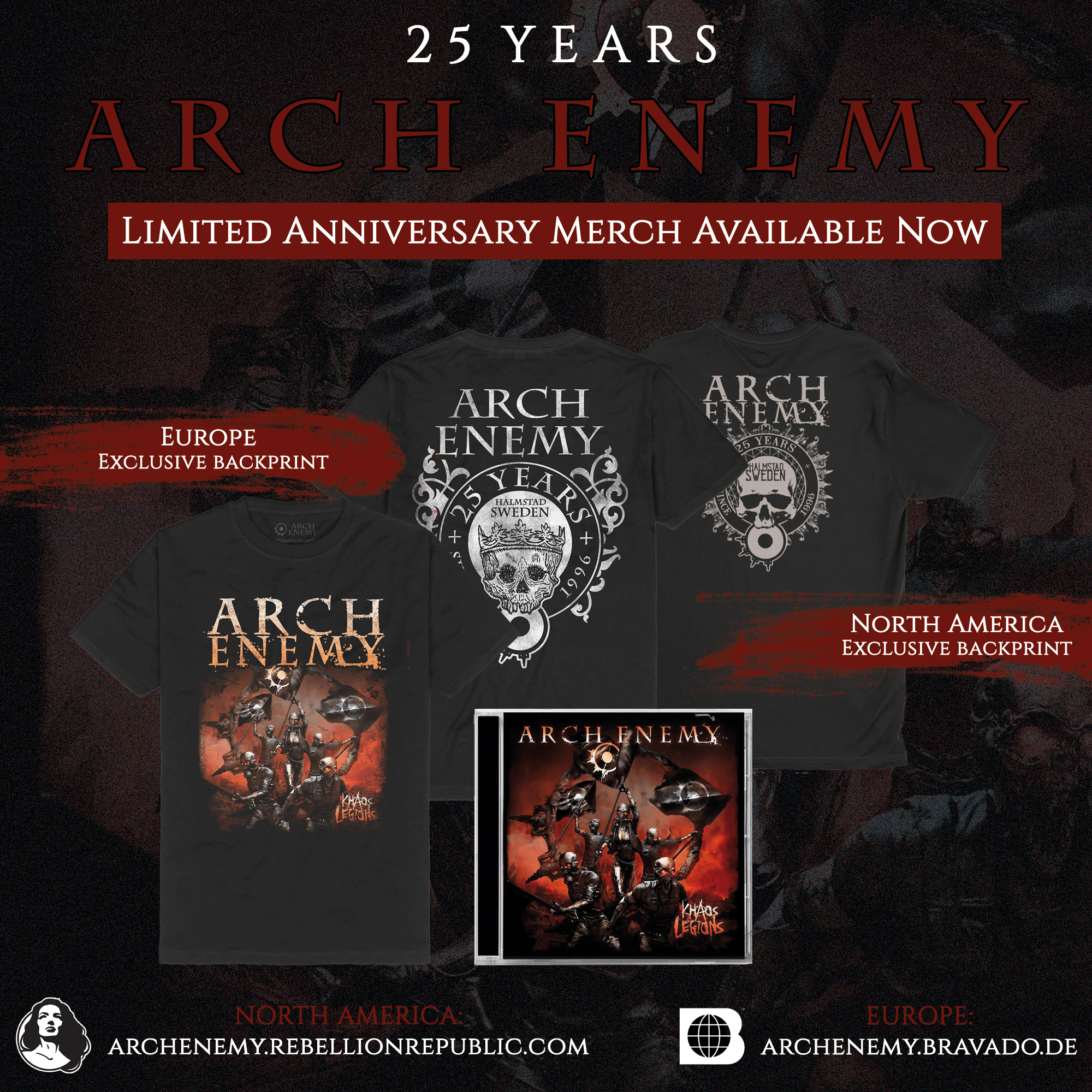 "Rise of the Tyrant” was released in 2007 and then we didn’t put out a new studio album of all-new material until 2011. This was an untypical longer gap between releases for us, but we actually did stay busy in those years in-between. We mixed and released the “Tyrants of the Rising Sun” (Live in Japan) DVD/CD/Vinyl set in 2008 and that same year I was a part of the reunion of CARCASS, which for me lasted up until the summer of 2010. I had recommended Daniel for the drummer position in that group as well, so we were touring intensively around the world during a couple of years there outside of ARCH ENEMY.

In 2009 we went into the studio with ARCH ENEMY and re-recorded a selection of songs off the first three albums, with Angela on vocals and Andy Sneap mixing. I am not a huge fan of re-recording older music, but somehow we had agreed to do this and we went ahead and got it done. We named the project “The Root Of All Evil”, and lo and behold - it becomes a huge seller in Japan, and also did well for us around the rest of the world and we ended up touring extensively on what is essentially not a “real” album.

The thing was, we had recently parted ways with a manager of 10+ years and become essentially self-managed with Angela doing most of the managerial tasks. In fact, the separation with our old manager became lyrical for inspiration the song “Thorns in my Flesh”. All this upheaval turned out for the best in the end, as we quickly realised that we got a lot more opportunities and were able to really make a lot more out of it in this new DIY business setup we had created, so in that way this was a positive and exciting time for us.

During this period I also wrote and recorded a SPIRITUAL BEGGARS album (2010’s “Return to Zero”) and we played a few shows in Europe and Japan. So I was actively playing with three bands between 2008 and 2010, we’d even sometimes be playing the same festivals - so that meant pulling double-duty and in some cases I even performed with all the three bands at the same festival. It was a little intense and of course something we couldn’t keep up forever.

The CARCASS reunion touring was a lot of fun and certainly successful, but I also knew we had to get back to ARCH ENEMY at some point and continue our work.

At this point I was also eager to write and record new music. I remember that we did a lots of full band rehearsals with ARCH ENEMY, preparing for this album in Sweden. Angela wrote some powerful lyrics as usual and Sharlee contributed to the music writing on a few songs, which was something he hadn’t done in a long time.

Although some really killer stuff came out of these sessions, it was quite strenuous to be honest. I think we were pulling in different directions at this point and in hindsight I can see that there was no way we could keep this version of the band going much longer. That’s how bands are, it’s relationships - and most relationships don’t last forever.

We recorded the “Khaos Legions” album at Sweetspot Studio, close to Halmstad, Sweden - a place we’ve used a lot of the years. We had Rickard Bengtsson engineer and co-produce the album with us, the same situation as on the “Doomsday Machine” sessions a few years earlier.

A couple of the members were becoming a little less enthusiastic during this time - which was frustrating for the rest of us, but we got on with it and hoped it was a temporary slump and they’d get more motivated once we‘d hit the road again. We brought in a few guests on the album, most notably ex-Mercenary singer Mikkel Sandager adding some melodic vocal parts and our friend Per Wiberg made a welcome return on keyboards.The mix was done by Andy Sneap in the U.K., once again we initially had different plans to mix in Sweden but that didn’t work out and Andy graciously stepped in and saved the day once again. He’s good dude, that one!

There’s a lot of music on this record and we had a few really awesome tunes on it like  “Yesterday’s Dead and Gone”, “No Gods, No Masters”, Bloodstained Cross” and “Under Black Flags We March”. These are all songs that have seen a lot of action in our live show since they were first released on the “Khaos Legions” album.

I enjoyed working with talented artist Brent Elliott White on the album cover, the image of the band members as post-apocalyptic freedom fighters was inspired by Eugène Delacroix's Liberty Leading the People.

During the early days of the tour that followed, Chris quit the band for the second time. Although disappointing of course, it wasn’t unexpected. This however didn’t slow us down, we quickly found a younger American guitarist who came in and did a great job helping us finish up the touring we had booked as we went around the world once again.

To be honest, it was a moderately successful time for the band. At this point we were comfortably cruising along, but not breaking new sales records or even musical ground. I didn’t like to admit at the time - but it had become a little stale. Had we reached the end? "