In celebration of our 25th anniversary, we’re bringing you strictly limited merch bundles for every studio album we've ever released. Who’s here for “Anthems Of Rebellion”? Hands up!

Get your bundle now: http://bit.ly/AE25Years! 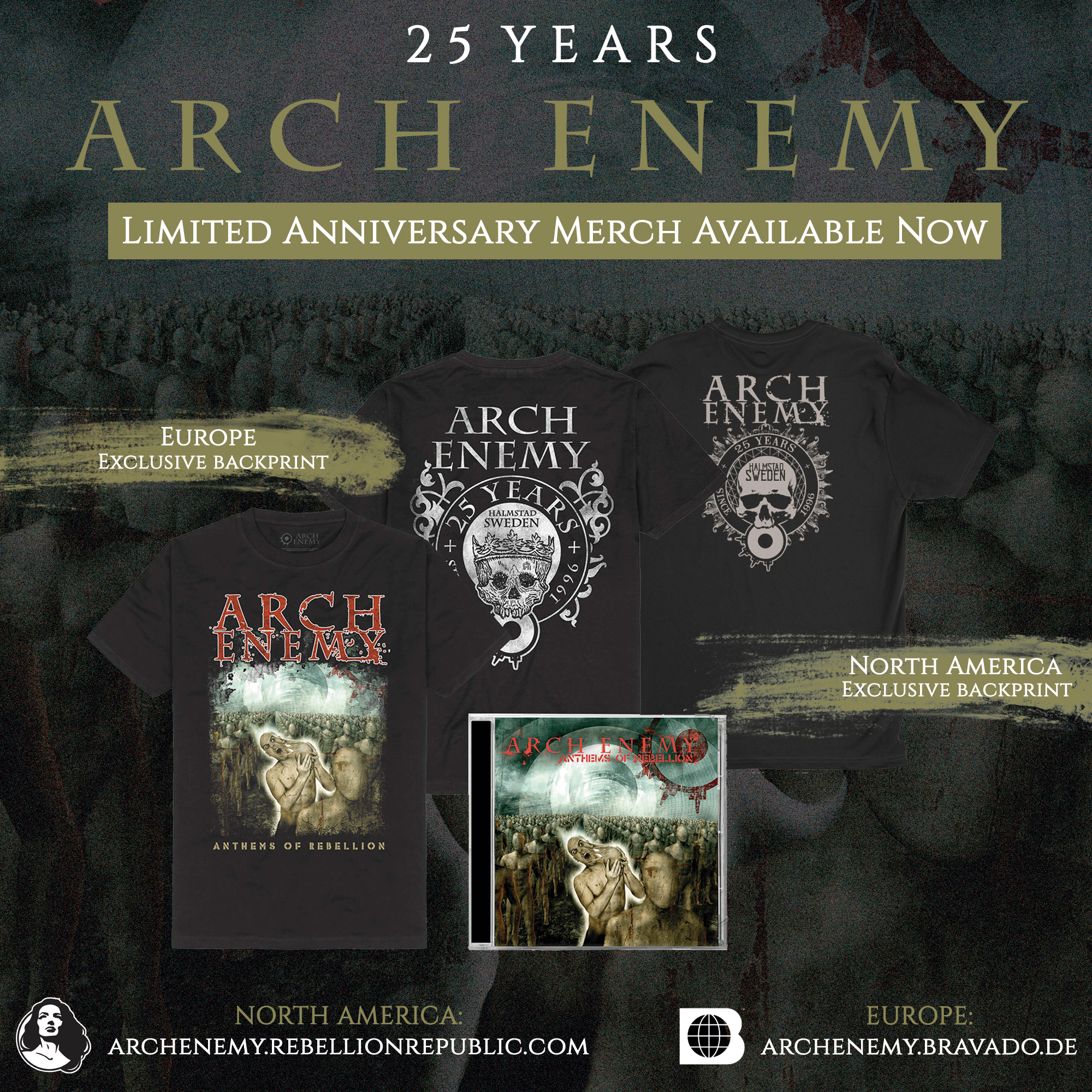 ⁠⁠"During the “Wages of Sin” campaign, things had really become quite busy and the wheels were rolling faster and faster in the Arch Enemy world. Tour offers and opportunities kept coming in all the time and we just went with the flow and worked as hard as we could. It was an exciting time and we learnt a lot and we were becoming a much better live band for sure!

I remember we played the last show on the “Wages of Sin” world tour on a Friday and started pre-production for “Anthems of Rebellion” on the following Monday with producer Andy Sneap. Looking back on it now, that was just crazy schedule… This was the first album we did not record in Sweden. Due to all the touring, we didn’t have a proper overview of the material we had written at sound checks and hotel rooms etc, so Andy flew over to Sweden for a few days of preproduction before we headed over to his studio in Derbyshire U.K.

It was really useful to get Andy’s input and we got a lot of work done before we relocated to the U.K. and began tracking the album.

Listening back to the album today I can hear that we were influenced by the large amounts of touring we had done leading up to it, the songs were written for the live stage. The arrangements are definitely more streamlined and have a “don’t bore us - get to the chorus” attitude. Chris brought in a skeleton idea for the music that became “We Will Rise” which we fleshed out together in the rehearsal room and I wrote the lyrics for it. Daniel started contributing some riffs as well, so the album was a collaborative effort. We also had Chris do some singing on the record, like on the intro of “We Will Rise”, the chorus of “End of the Line,” as well as trading vocal lines Angela on the verses of “Dehumanization”. We were trying new things in the production aspect, some of it worked well and some things maybe not so much, but you learn by doing and I don’t regret any of it.

We had gotten the offer to tour with SLAYER in the States and this was one of the reasons why we were hurrying up to get a new record out in time for that. We shot a video in Sweden for “We Will Rise” and at the time the video got a nice push in North America from the TV shows Headbangers Ball and Uranium, which I think, alongside the long SLAYER tour, helped make “Anthems of Rebellion” give our label Century Media their highest first-week Soundscan sales in the United States.

In retrospect, “AOR” is maybe not my favourite ARCH ENEMY album, but I certainly have fond memories of this era of the band and I know that it was the record where a lot of fans discovered us. Songs like “We Will Rise” and “Dead Eyes See No Future” remain in rotation in our live show to this day - and that says it all really!"