In celebration of our 25th anniversary, we’re bringing you strictly limited merch bundles for every studio album we've ever released. Get your “Wages Of Sin” (2001/2002) bundle now: http://bit.ly/AE25Years! 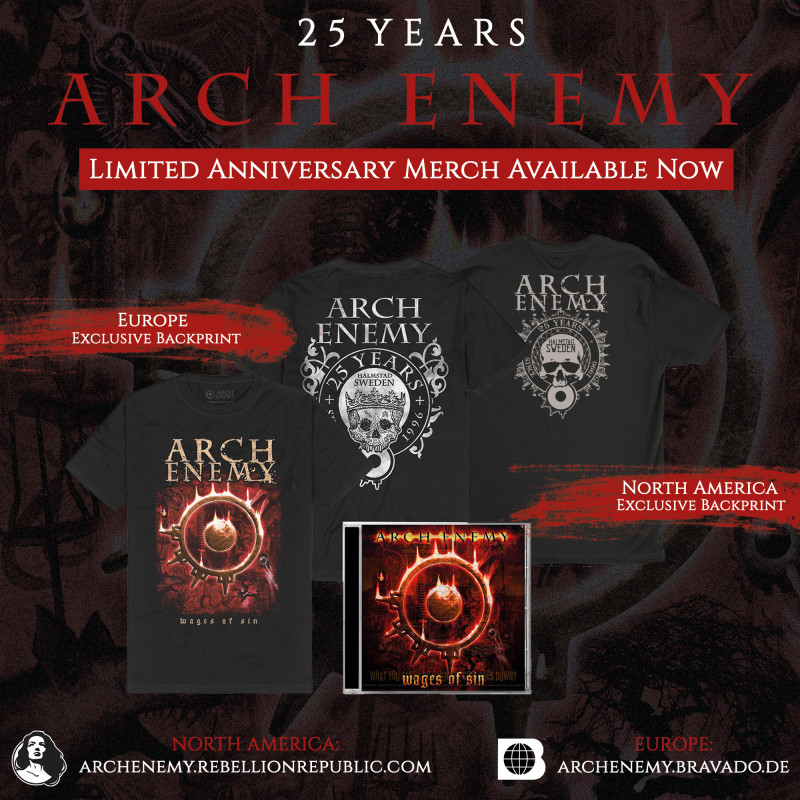 "We started putting songs together for the “Wages of Sin” album around the tours we did on the “Burning Bridges” cycle. That’s how we do it in ARCH ENEMY, the writing process and collecting of ideas never really stops - it’s a continuous thing. Around this time it had become increasingly clear that Johan was not able to make touring around the world with ARCH ENEMY a priority in his life. Johan will be the first one to admit that he prefers to do music as hobby, fitting it in around his day job. That’s totally fine, music IS a fantastic hobby for a lot of bands and people… But the rest of us were eager to explore how far we could really take the band - we enjoyed the touring lifestyle and spreading our music as much as possible. And to be honest, we didn’t have a whole lot else going on in our lives – this is what we wanted to do, all the time. Parting ways is never easy and it was sad to see Johan go, possibly more for myself than anyone else, him being one of my oldest and dearest friends, (something that remains true to this day). But I knew in my heart that the decision was for the best - for everyone involved - in the long run.

The story about how we found our singer Angela Gossow has been told many times - it’s so well documented that there’s maybe no real need to repeat it once again here? However I can say that this was a pretty radical choice of singer at the time…it was practically unheard of back then to have a female singer growling and screaming, at least coupled with the notoriety, musicianship and songwriting skills found in a band like ARCH ENEMY. After the initial rehearsals with her we felt that this was an exciting direction musically, Angela had a really killer voice and undoubtedly a striking look to match it - but little did we know how much of an icon and influence Angela would become in the Metal scene. I’m glad we didn’t know actually, it might’ve added a little too much pressure to the whole thing. Instead we just enjoyed putting the music and lyrics together, crafting the songs for what would become “Wages of Sin”.

In December 2000 this new ARCH ENEMY lineup entered Studio Fredman in Gothenburg, Sweden once again. The studio had now moved to a new and much bigger location. Fredrik Nordström had also switched over from analogue 2” tape to Protools at this time, so this was our first all digital recording. Per Wiberg came down from Stockholm and added various keyboards, including the now iconic piano intro to opening track “Enemy Within” and the Mellotron on “Snowbound”.  We had decided that we wanted to mix the album in U.K. with Andy Sneap, and I remember Fredrik being a little sceptical about that, as well as not being too keen on our decision to hire a new singer. A lot of things were changing at this time in ARCH ENEMY and I don’t blame him for wondering what the hell we were doing!

The recording process must’ve run smoothly though as I don’t recall any problems or issues. We knew we had a strong collection of songs going in, but as we kept adding instruments and parts to the album we began to sense the power of the album that we were creating. This feeling increased tenfold during the mix with Andy at his old Backstage Studios facility in Derby, U.K., Andy had an incredible talent for making everything super clear and punchy and hearing ARCH ENEMY in this way was super exciting. We had kept identity of Angela under wraps but once we completed the album, we had to start thinking about how to approach announcing the news to the world. We decided to make some samples of the new music available online, without revealing the identity of our new vocalist…obviously this started a huge guessing game amongst the fans about who it was. A lot of interesting names came up, however nobody even guessed it was a female singer. This was quite a source of amusement for us at the time…

Eventually we delivered the album to our Japanese record label. A release date and promotional tour was booked and put together. Upon its release, “Wages of Sin’ immediately outsold our previous records in Japan, they accepted the singer change and loved the album. The Japanese fans had supported us since day one in a big way, so this was a huge relief for us.

But we had run into some other problems… Our management company at the time had a big disagreement with our record company Century Media, leading to a delay of the European and U.S. release by almost a full year! Consequently, we were just sitting around at home waiting around for things to get resolved while there were many thousands of “Wages of Sin” CD copies imported and sold out of Asia to the rest of the world during those 12 months. We were frustrated and definitely believed this would hurt the release outside of the Japanese market - but if it did, we never noticed. Once the album received a worldwide release in March 2002, it was like an explosion of enthusiasm and activity unlike anything we had previously experienced with the band. “Wages of Sin” catapulted us into a whole other level, and it was amazing to be a part of it. We started touring like maniacs around the world and I think we almost forgot what our homes looked like - be careful what you wish for, right?