In celebration of our 25th anniversary, we’re bringing you strictly limited merch bundles for every studio album we've ever released. Give it up for “Burning Bridges” (1999)! Head over to http://bit.ly/AE25Years to get your copy of the bundle! 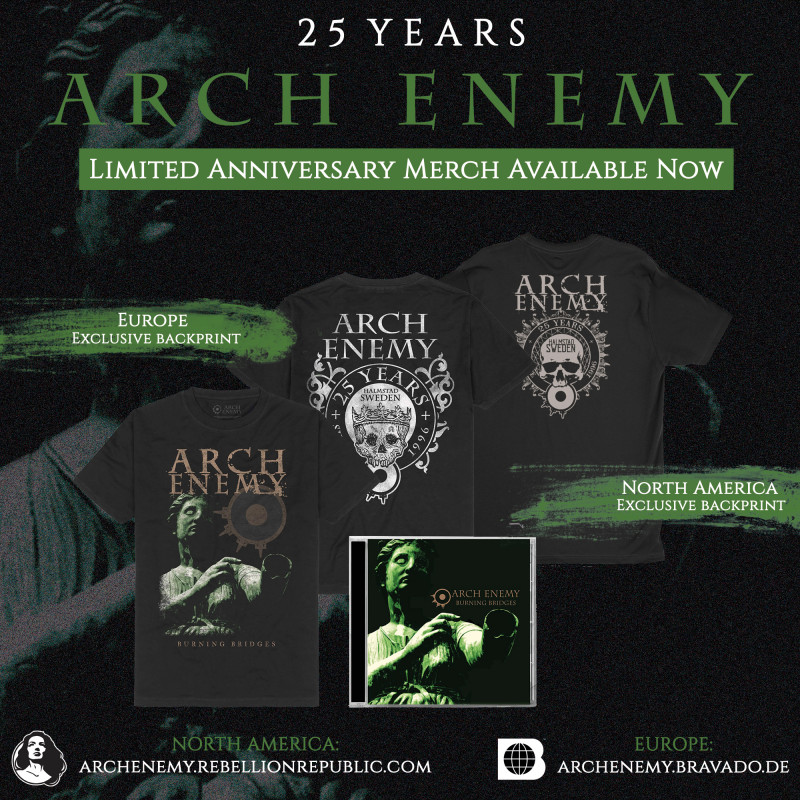 I have very fond memories of writing and rehearsing for the “BURNING BRIDGES” album. Daniel was back on drums and we’d recruited a friend of mine, Sharlee D’Angelo, on bass. We had some really great songs coming together, tracks like “The Immortal”, “Silverwing”, “Seed of Hate” showed us stretching out and getting into some new areas musically. Per Wiberg (SPIRITUAL BEGGARS, ex-OPETH etc) came to the studio and played the Mellotron keys on the album’s last song, the ultra-heavy Doom Metal title track. It was enjoyable to experiment a little bit and play around within what we now were beginning to define as the musical style of ARCH ENEMY.

We returned for a third time to Gothenburg to work in Studio Fredman with producer/mixer Fredrik Nordström, a natural choice as our previous trips to his studio had yielded pleasing results. Fredrik also contributed keyboards as usual, adding his personal touch to the sound beyond his obvious talents as a studio engineer. Having Sharlee onboard also turned out to be pivotal to the shaping the bands sound with his powerful tone and colourful bass lines. Chris and I were taking the guitars further than ever before, we were all highly motivated and inspired. Exciting times. We spent two intense weeks recording and mixing “BURNING BRIDGES”.  I vaguely remember drinking ridiculous amounts of beer in the local bowling alley at night to celebrate what we had created in the studio, followed by a lot of coffee in the mornings to get our heads back straight. Wash, rinse, repeat, ha! Although, I have to say we were very focused on the task at hand and we somehow got it all done in those 14 days in the studio.

This turned out to be the last album with Johan Liiva on vocals, and maybe ironically this is my favourite “Johan album”, he really delivered a stellar vocal performance on this one. After the release of the album we quickly went on tour in Europe as the opening act on a package with IN FLAMES, CHILDREN OF BODOM and DARK TRANQUILITY.  Amazing package, hell of a great time. R.I.P. Alexi Laiho!

That year we went back to Japan for the third year in a row... A very successful headline tour with Swedish band WITCHERY as the opening act. I can not emphasise enough how important the Japanese fan base was to the band, they kept us alive at the time. The intensity and rawness of that tour is perfectly captured on the “BURNING JAPAN LIVE 1999” album, released in Japan early 2000.

In January 2000 we went to USA for the first time, as the opening act for dark progressive Metal band NEVERMORE (featuring future ARCH ENEMY guitarist Jeff Loomis). That run was really memorable for many reasons, sharing a bus with NEVERMORE was...well, very interesting shall we say? But what a great band they were. R.I.P. Warrel Dane.

These were the last shows with Johan on vocals. Much has been said about that sudden change of singers in ARCH ENEMY back then and I’ll talk about in the next instalment...

To summarise, this was a fun and carefree record to make and the last of its style and vibe for ARCH ENEMY. The 90’s had drawn to a close and things were about to become very interesting for us..."