In celebration of our 25th anniversary, we’re bringing you strictly limited merch bundles for every studio album we've ever released. Now it’s time for “Stigmata” (1998)! Head over to http://bit.ly/AE25Years to get your copy of the bundle! 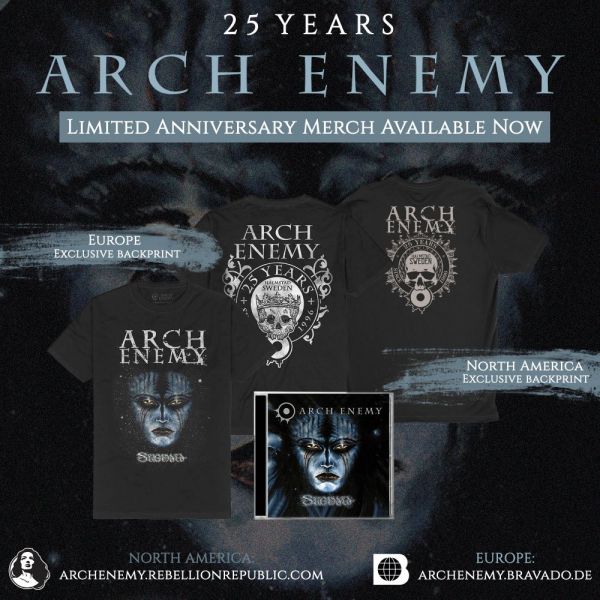 "Arch Enemy 25th anniversary random fun facts & memories with Michael Amott, part 2/10: Going into the second album was a very different experience to the first one.  Our drummer Daniel had mysteriously disappeared and was nowhere to be found. Enter Peter Wildoer, another great Swedish musican, with Peter behind the kit we proceeded with the (limited) touring on the debut album (three shows in Japan 1997 and a dozen or so dates in Europe). We had also recruited bass player Martin Bengtsson for the live shows.

Upon returning back home from Japan and Europe, we almost immediately threw ourselves into rehearsals with Peter on drums to work up material for a new record. The writing was a little more thought out this time and not quite as spontaneous or wild as before, that’s just the frame of mind we were in at the time. We came up with some cool tunes though, a slightly more technical approach in the riffs and drums, certainly a lot more guitar solos and the songs were getting loooonger!

At this time we also found a new label home with Century Media Records for the world outside of Japan (where we continued to work with the same label that had kicked ass with our debut over there).

We returned to Studio Fredman in Gothenburg and recorded/mixed the “Stigmata” album in 12 days. Unfortunately, Johan Liiva got really sick and it affected his vocal performance...although he pushed through like a champ and got it done, in hindsight we should’ve waited for him to get better. You live and learn from these experiences.

We sent the album off to the Japanese label and awaited their response. They got back to me with a request for us to deliver two faster songs, in the style of the debut album. That was a little unexpected and stressful I remember, but I accepted the challenge and quickly put together “Beast of Man” and “Diva Satanica” with the guys. Daniel had appeared on the scene again with a reformed version his original band EUCHARIST, whom we actually did some shows together with in Europe and we had reconnected with him, which in the end led to Daniel rejoining ARCH ENEMY in time to record those two additional songs with us. Daniel has obviously occupied the drum throne in this band ever since.

Another issue was the album cover we had created for “Stigmata” together with Swedish designer Segerfalk X (who also designed the now very familiar circular ARCH ENEMY symbol at this time!). Japan and USA were fine with the artwork we had submitted, but the European Century Media office wanted another cover and commissioned a piece from Belgian artist Kris Werwimp. That’s why there are different sleeves for this album in Japan/USA/Europe. Also the selection of tracks and order etc differed between the various markets - also later reissues had yet another different sleeve - all quite confusing!

When “Stigmata” came out we went back to Japan and headlined shows there for the first time which was really great. We also played the German Wacken festival that summer and a few other things, but not a whole lot of touring really.

Having a real worldwide proper release for the first time through Century Media made a big difference and we did a fair bit of press for the album. I talked to media all around the world and I recall that some (especially American) journalists didn’t really understand what we were trying to do, especially concerning all the guitar solos we had in the music. I guess that’s how it goes when you’re kind of creating something that is not currently in vogue. Everyone kind of caught up later anyway, so it’s all good!

Historically, I always maintained that “Stigmata” was of my least favourite ARCH ENEMY albums (probably to do with that my personal life was a complete shambles at the time) but in recent years I’ve come around, and I believe that there are some really great standout tracks and interesting musical moments on the record. We jumped in to the next album pretty quick after this and the following album and chapter of the band was about to unfold only one short year after “Stigmata” came out..."